The local jewel of diving

The most northernly coral reef ecosystem in the eastern Pacific

The local jewel of diving

Up the coast from Los Cabos is one of the local jewels of diving, Cabo Pulmo National Marine Sanctuary. Often referred to as the most northernly coral reef ecosystem in the eastern Pacific, the reefs inhabitants have flourished from protection.

The reef is approximately 20,000 years old, an age that places it among the oldest in the American Pacific.
In 1995 the area, around 7,000 hectares, was declared a Natural Protected Area and classified as a National Marine Park in order to preserve its biodiversity and reduce to the minimum the level of human impact.

What can I see?

Explore the best diving in Cabo

There are around 10 dive sites that are worth to be explored among them the 2 most popular are “El Bajo” and “El Cantil”.

Along this Reef the coral and  the vegetation are spectacular. This site is a great opportunity for U/W photography as you can expect to see Turtles, large Groupers and Pargo. Also Whale Sharks and Manta Rays as well as Bullsharks can be encountered in the Marine Park. All of this might be accompanied by the love song of a Humpback Whale.

It’s a great dive site where you can glide through nice canyons where vertebrate and invertebrate species find home. Since Cabo Pulmo has become a protected area, large schools of bat rays have taken residence there and it is not uncommon to see Manta Rays, schools of Jacks, Triggerfish, Blennies, Wrasse and many other.

Friendly Staff, Safe Boats & The Best of Diving in Cabo 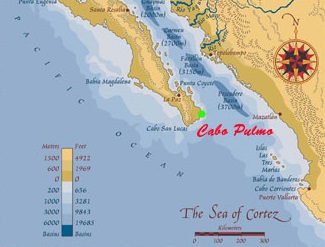